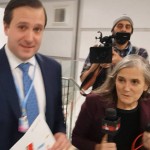 The Trump administration is promoting fossil fuels at the U.N. climate summit in Katowice, Poland, despite outcry from climate activists and world leaders concerned about the devastating threat of climate change.

Trump’s Energy Adviser Runs Away When Questioned by Democracy Now! at U.N. Climate Talks
The Trump administration is promoting fossil fuels at the U.N. climate summit in Katowice, Poland, despite outcry from climate activists and world leaders concerned about the devastating threat of climate change. Chief among Trump’s representatives at the climate summit is Wells Griffith, special assistant to the president for international energy and environment. He is a longtime Republican operative who served as deputy chief of staff to Reince Priebus when Priebus was chair of the Republican National Committee. Amy Goodman attempted to question Wells Griffith about the Trump administration’s climate policy at the U.N. summit Tuesday. Griffith refused to answer questions and ran from our camera team for about a quarter-mile, retreating to the U.S. delegation office.

Typhoon Haiyan Survivor: Fossil Fuel Companies Killed My Family by Hastening Climate Change
As we broadcast from the U.N. climate summit in Katowice, Poland, world leaders and officials from nearly 200 countries are here to negotiate how to implement the 2015 Paris Agreement. But three years after Paris, they appear no closer to curbing global emissions and halting catastrophic climate change. New studies show global carbon emissions may have risen as much as 3.7 percent in 2018, marking the second annual increase in a row. As the U.N. Intergovernmental Panel on Climate Change reports that humanity has only a dozen years to mitigate climate change or face global catastrophe, Joanna Sustento is interviewed, who has already felt the harrowing effects of climate change and has dedicated her life to climate activism as a result. Her life was turned upside down in 2013, when Typhoon Haiyan, one of the strongest cyclones in recorded history, devastated the Philippines, killing five members of her family and thousands of others.

U.S. & Other Big Polluters Obstruct U.N. Climate Talks, Stalling Efforts to Reduce Carbon Emissions
The world’s worst emitters are hindering negotiations at the U.N. climate summit in Katowice, Poland, even as countries from the Global South warn that they could face annihilation without drastic action to confront climate change. Harjeet Singh is interviewed, who has been observing how the U.S. and other big polluters are hindering climate talks. He is the global lead on climate change for ActionAid. He’s been working with climate migrants in several countries, and he is based in New Delhi, India.