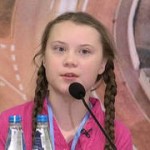 Democracy Now! is broadcasting from the U.N. climate summit in Katowice, Poland, this week, where world leaders gathered to negotiate climate solutions were confronted last week by a teenage climate activist who says they are not doing enough to turn back the clock and prevent catastrophic climate change.

“Our Leaders Are Behaving Like Children”: Teen Climate Activist Confronts World Leaders at U.N. Summit
Democracy Now! is broadcasting from the U.N. climate summit in Katowice, Poland, this week, where world leaders gathered to negotiate climate solutions were confronted last week by a teenage climate activist who says they are not doing enough to turn back the clock and prevent catastrophic climate change. Fifteen-year-old Greta Thunberg stunned the world last week when she denounced world leaders for inaction and told them: “change is coming whether they like it or not. The people will rise to the challenge. And since our leaders are behaving like children, we will have to take the responsibility they should have taken long ago.” She has made international headlines since launching a school strike against climate change in her home country of Sweden earlier this year. Every Friday, she protests outside the parliament building in Stockholm instead of attending school, and her actions have inspired thousands of students across the globe to do the same. DN speaks with Thunberg in person and plays an excerpt of her speech that went viral. “I like school, and I like learning,” said Greta, who plans to end her strike when Sweden starts cutting carbon emissions by 15 percent a year. “But why should we be studying for a future that soon may be no more? This is more important than school, I think.”

School Strike for Climate: Meet 15-Year-Old Activist Greta Thunberg, Who Inspired a Global Movement
As government ministers from around the globe gather in Katowice, Poland, for the final days of the 24th U.N. climate summit, 15-year-old activist Greta Thunberg is interviewed, who denounced politicians here last week for their inaction on reducing greenhouse gas emissions. She has garnered global attention for carrying out a weekly school strike against climate change in her home country of Sweden. “We need to change ourselves now, because tomorrow it might be too late,” says Thunberg. Her father, Svante Thunberg, is a Swedish actor.

Climate Scientist: World’s Richest Must Radically Change Lifestyles to Prevent Global Catastrophe
The 24th United Nations climate summit comes amid growing warnings about the catastrophic danger climate change poses to the world. In October, the U.N. Intergovernmental Panel on Climate Change warned that humanity has only a dozen years to mitigate climate change or face global catastrophe—with severe droughts, floods, sea level rise and extreme heat set to cause mass displacement and poverty. But on Saturday, the United States, Saudi Arabia, Russia and Kuwait blocked language “welcoming” the landmark IPCC climate report. New studies show global carbon emissions may have risen as much 3.7 percent in 2018, marking the second annual increase in a row. A recent report likened the rising emissions to a “speeding freight train.” Kevin Anderson is a professor in climate change leadership at Uppsala University’s Centre for Environment and Development Studies, and 15-year-old climate activist Greta Thunberg are interviewed about the drastic action needed to fight climate change and the impact of President Trump on climate change activism.