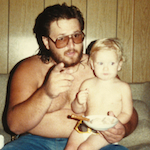 Mike Mays thought he was looking into police brutality and the problems with their training. What he found were some roots into his own attitudes toward the police, and authority in general, that run deep in his family — and a greater, more nuanced understanding of the role of fear in police culture in the U.S.

I’m not the ‘enemy’ in the eyes of the police. I’m white, ‘middle class’. Hello white privilege. So, why have I always had a chip on my shoulder towards authority? I have never been arrested, and even got a couple ‘get out of jail free’ cards from cops back in the day. Yet my perception of authority has endured extreme polarization. 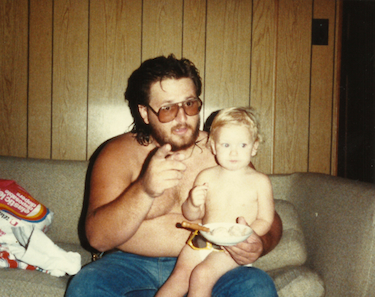 The author on his Outlaw dad’s knee, on their infamous trip to Florida to visit Grandpa Harry.

In a dream world, police would be perfectly trained, Freddy Gray incidents would not exist, and our cops would not be at war with certain citizens. I’m not a ‘criminal’, but I am the first male on my dad’s side in two generations (possibly three) to not be one.

My great grandpa was definitely a bootlegger at one point in his life, evidenced by him losing a scholarship to Cumberland College for bootlegging. Grandpa Harry did two years for robbing a savings & loan. My dad was in the Louisville Outlaws motorcycle gang; think motorcycles, guns and drugs. Dad told me recently that the trip to Florida to see grandpa Harry when I was three was actually because he was hiding from the cops.

I was born in 1981, but dad didn’t straighten his life out until about ’87, when I saw him on the news in a bright-orange jail suit. He got busted with a trunk full of guns coming back from Virginia. What really tops this all off is that my mom’s dad was a cop. He and I are not close; not because he was a cop, but because he wasn’t all that present in mom’s life.

Still, that’s a lot of recent ancestral baggage, which has called for some self-investigation while writing this piece. It gave me the advantage of seeing the issue from both sides. I know there are some bad cops, and generally I’ve used that knowledge to fuel my distaste for them over the years. However, I’m not an anarchist, I understand the need for authority. I’m now old enough and wise enough to know that to hate the police is not a fair or healthy outlook. We need the police. I’ve called on them more than a few times myself. They’ve never done me harm.

So, why does my blood boil when they abuse their authority? My ancestry. Also, I’m a pot-smoking artist/skateboarder who loves punk, reggae, hip-hop music — and, ultimately, police brutality is just plain wrong.

How do we stop it? Could better training stem excessive force? I decided to interview an officer from the Louisville Metro Police Department. He’s currently working at a high school where I was a substitute teacher, one of the ‘worst’ high schools in Louisville, where a great number of kids are considered ‘at-risk’.

To be clear, he is not a security guard for the school. He handles deeper issues with students who might be homeless, victims of abuse, or whose guardians are extremely bad influences. Before this job, he worked the beat during the graveyard shift in the West End and Portland neighborhoods in Louisville. Those are the areas with the most housing projects, and highest crime rates. The Portland neighborhood was my dad’s old stomping grounds. You can see the big skull & crossbones (engine pistons) on the face of the Louisville Outlaws clubhouse as you enter the West End coming down Market Street.

I sat down with Officer Bob*, in a glass-walled conference room next to the school’s main office. I was a little nervous because it was my first interview. I think he was a little confused as to what astrology had to do with police training when I told him Planet Waves was an astrology website. That’s what I get for calling it an “astrology website.” Lesson learned.

After asking about his work history with the force, I began by mentioning the Freddie Gray video, which had just been released one day prior. I asked if he had any opinion or insight as to why this kept on happening. He said he couldn’t speak for another officer, or officers’, actions. Fair enough.

I asked if de-escalation and risk-assessment were part of his training. He explained that, yes, he was given “scenarios” where he practiced using de-escalation, and risk-assessment techniques to avoid force. He added, “but there’s only so much they can teach you.” Knowing the neighborhoods where he patrolled for seven years, I believed him. Still, I wanted to know if there were any instances in his career when he felt like he would have benefited from better training. He said no, but he did think that better training would help.

After the interview, I felt a wee bit of healing in my ancestral rift with authority, but not much. I still felt fairly shitty about cops in general, convinced the officer I interviewed was a rare breed. The Freddie Gray video didn’t help. I had no idea what was coming, but I felt the wave building inside and all around me.

There are good cops out there, I knew that much. I needed to know there were a bunch of good cops grouped together. I needed to know that some police department, somewhere, knew how to train their officers. I burned to know that there was an alternative to the antagonistic, occupying forces that, by way of systemic and/or blatant racism, were making the lives of blacks all across this nation a living hell.

Also, I could not overlook the obvious racial element underlying much of this issue. I’ve been seeing this since Rodney King. I was admittedly scared when I saw the LA riots on the news as a boy, but that was before I could see behind the veil of the media. This issue is bigger than police training and brutality.

Still, I Googled “progressive police departments,” and came upon a jewel of an article in The Atlantic. In it, Seth Stoughton, an ex-cop turned scholar, pointed out that although American cops are among the best trained in the world, “what they’re trained to do is part of the problem … Officers aren’t just told about the risk they face. They are shown painfully vivid, heart-wrenching dash-cam footage of officers being beaten, disarmed, or gunned down after a moment of inattention or hesitation.”

It’s easy to imagine how that trains officers to shoot first, and ask questions later.

However, as the article points out, there is hope. Richmond, California’s, police department is getting results by way of better training. Stoughton writes, “Police agencies that have emphasized de-escalation over assertive policing, such as Richmond, California, have seen a substantial decrease in officer uses of force, including lethal force, without seeing an increase in officer fatalities (there is no such data on assaults).”

Obviously, it’s better to try to talk a person out of trouble than to provoke them into it. With at least one example for less enlightened police departments to follow, I had hope. Better training is a step in the right direction; but other police forces need to be aware it exists. And the citizens and officials of the communities they police need to vocally and actively push for this kind of change. Of course, there is no panacea: no amount of scenario training, no fail-proof de-escalation chart, no algorithm that can fix such systemic issues by itself. A complex web of factors contributes to the current state of police culture in the U.S.

As for my beef with authority, it’s been cut down to a digestible portion. As of completing the first draft of this piece (May 9), the Sun is a couple days past an exact conjunction with my midheaven, and will be exactly conjunct my natal Chiron in a matter of minutes. My wounded perception of authority is healing. Officer Bob, if you’re reading this, that’s how astrology relates to it all.

Responding to the issue of police brutality with some investigation forced me to be honest with myself. I can finally empathize with the police, even while the war rages on outside — but I’ll always stand firm against abuses of authority. Yet I can’t help but wonder, given my dad and grandpa’s run-ins with the police: if they weren’t white would I even be here?

*not his real name