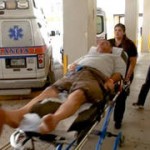 A stunning new study by researchers at Harvard has revealed the death toll in Puerto Rico from Hurricane Maria may be 70 times higher than official count of 64. The new research, published in the New England Journal of Medicine, says the death toll is at least 4,645—and perhaps as many as 5,740.

Deadlier than Katrina & 9/11: Hurricane Maria Killed 4,645 in Puerto Rico, 70 Times Official Toll
A stunning new study by researchers at Harvard has revealed the death toll in Puerto Rico from Hurricane Maria may be 70 times higher than official count of 64. The new research, published in the New England Journal of Medicine, says the death toll is at least 4,645—and perhaps as many as 5,740. President Trump has so far not responded to the new study. But in October, during a visit to Puerto Rico, Trump boasted about the low official death count. With a death toll of at least 4,645, Hurricane Maria would become the second-deadliest hurricane in U.S. history—behind only the Galveston Hurricane of 1900 which killed as many as 12,000 people in Texas. The Harvard study found that “interruption of medical care was the primary cause of sustained high mortality rates in the months after the hurricane, a finding consistent with the widely reported disruption of health systems. Health care disruption is now a growing contributor to both morbidity and mortality in natural disasters.”

Glenn Greenwald: Why Did ABC Ignore Roseanne Barr’s Hateful Tweets Against Arabs & Palestinians?
On Tuesday ABC canceled its hit show “Roseanne”, after its star, Roseanne Barr, fired off a series of racist comments on Twitter. In one tweet, Roseanne wrote, “muslim brotherhood & planet of the apes had a baby=vj.” It was a reference to Valerie Jarrett, longtime adviser to President Obama, who’s African-American. Roseanne also accused billionaire George Soros, who’s Jewish, of being a Nazi collaborator and attacked Chelsea Clinton. The decision to cancel Roseanne was made by Channing Dungey, the first African-American president of a major TV network. The reboot of the hit 1980s sitcom Roseanne last year drew huge audiences and praise from President Trump, who once called Roseanne Barr to congratulate her on the show’s success.

39 Arrested Protesting Industrial Farm Supplying So-Called “Cage-Free” Eggs to Amazon & Whole Foods
On Tuesday, hundreds of people with the group Direct Action Everywhere marched to an industrial shed housing chickens in Petaluma, California, that is owned by Sunrise Farms, which supplies cage-free eggs to Amazon and Whole Foods. Activists say they removed 37 chickens and took them to get veterinary care. Police arrested 39 people for trespassing.

Glenn Greenwald on Julian Assange, Ecuador & Threats to Press Freedom
WikiLeaks founder and editor-in-chief Julian Assange is at risk of being removed from the Ecuadorian embassy in London where he has taken refuge for nearly six years, CNN reports. If he is forced out of the embassy, Assange could face arrest by British authorities and extradition to the United States. The Ecuadorian government cut off Assange’s internet in March. Former Ecuadorian President Rafael Correa told The Intercept that the government has also blocked Assange from receiving visitors, calling the tactic “torture.” Correa said that Ecuador was not maintaining “normal sovereign relations with the American government—just submission.” In other Assange news, last month the Democratic National Committee sued WikiLeaks for its role in publishing hacked materials relating to the 2016 election.

Greenwald: FBI Informant in Trump Campaign Once Ran CIA Spy Operation Helping Reagan Win in 1980
A top House Republican has defended the FBI against a series of attacks by President Trump, who’s claimed without evidence that the bureau planted a spy in his 2016 presidential campaign. Rep. Trey Gowdy, chair of the powerful House Oversight Committee, said Tuesday that the FBI was acting properly when it deployed a confidential informant—Stefan Halper—to investigate Russian attempts to interfere in the election.

Glenn Greenwald on Mueller, Chelsea Manning & New Martina Navratilova Doc with Reese Witherspoon
In this extended interview with Pulitzer Prize-winning journalist Glenn Greenwald of The Intercept, he discusses Mueller’s Russia probe and Chelsea Manning’s run for Senate. He also describes his partnership with actor Reese Witherspoon on a new documentary about tennis legend, Martina Navratilova, that will explore her achievements as a social justice pioneer and role model through his own experience as a gay child growing up in Reagan-era Florida.

Eric is rapidly moving out chapters of The Sacred Space of Self, your 2018 Spring Reading on Chiron’s transition into Aries, and Mars retrograde in Aquarius over the summer. Order today and get all 12 signs for $99. You may read more about what Eric will be covering in your Spring Reading here.