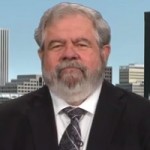 David Cay Johnston: Trump is “Appallingly Ignorant” on Healthcare & Puts Greed Above Human Lives
The Congressional Budget Office has warned that 32 million Americans would become uninsured over the next decade if Obamacare is repealed without an alternative in place. Seventeen million would become uninsured next year alone. The analysis also found the cost of a medical insurance policy would increase 25 percent next year and double by 2026. David Cay Johnston, Pulitzer Prize-winning investigative reporter and founder of DCReport.org, offers his views.

David Cay Johnston: GOP Budget Redistributes Money to the Rich & Helps Make U.S. a “Police State”
On Wednesday, the Republican-controlled House Budget Committee approved its 2018 budget resolution. The budget aims to rewrite the tax code to favor the wealthy and to slash funding for Medicare and Medicaid. It would also add another $30 billion to Trump’s record-setting $668 billion request for Pentagon spending. The budget faces opposition from both moderate and conservative Republicans.

“Trump and the Russian Money Trail”: Trump’s Ties to Oligarchs Go Back Decades
Trump on Wednesday said he never would have nominated Jeff Sessions to be attorney general had he known Sessions was going to recuse himself from a Justice Department investigation into alleged ties between Russia and Trump associates. One Russia expert says the smoking gun indicating a quid pro quo between Russian money and Trump may lie with a little-known case that was abruptly settled involving a holding company linked to the Russian elite. Prevezon’s lawyer is Natalia Veselnitskaya—the same Russian woman who initiated the now-infamous meeting with Donald Trump Jr. last June.