At the risk of appearing to reinforce dismissive stereotypes about women, the following image might help you to get a handle on some of the current astrology, which is still in effect after last night’s Cancer New Moon: the planets seem to be indicating a kind of ‘cosmic PMS’ that you might be noticing in yourself or others. Amanda Painter explains what she means by that, and looks ahead to the weekend astrology.

At the risk of appearing to reinforce dismissive stereotypes about women, the following image might help you to get a handle on some of the current astrology, which is still in effect after last night’s Cancer New Moon: the planets seem to be indicating a kind of ‘cosmic PMS’ that you might be noticing in yourself or others. 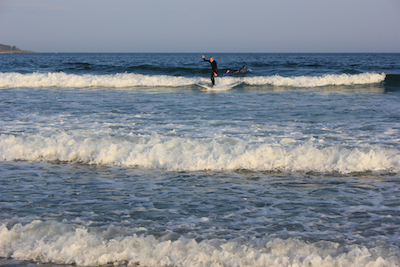 Even when the waves are small, riding them takes skill and awareness. Photo taken at Higgins Beach, Scarborough, Maine, by Amanda Painter.

Or, at least, the potential for that sort of experience is there, especially if you (or someone you interact with) ignore inner reactions before they get expressed.

Now, before you write off the current astrology as not applicable to you because either ‘you’re not like that’ or you’re not a woman, please consider a few things. First: according to astrology, we all contain an inner feminine and inner masculine, thanks to the archetypes of Venus and Mars. We each also contain an inner androgyne (androgynous self), thanks to Mercury.

Second: one of the prevailing aspects today involves a Mercury-Mars conjunction in a feminine (or receptive) sign, Cancer. They’re exactly opposite Pluto (named after a male god) in another receptive sign, Capricorn.

Third: we’re all ruled by our hormones, to some degree. We associate testosterone with men and aggression (there’s Mars again), but women have it too: for both sexes, it’s key to libido. Estrogen and progesterone regulate women’s menstrual cycles (associated since ancient times with the Moon, which rules Cancer), but men’s bodies also produce those two hormones.

Hormones also have a strong link with Pluto, which makes sense. Not only do Pluto and Mars rule Scorpio, which represents our generative (sexual) system, but Pluto represents what is invisible or underground, as well as undeniable power. If you’ve ever had any kind of hormone imbalance, you know what havoc it can wreck on all kinds of biological process in your body, in addition to your emotions.

So what does this all add up to for you? As Eric mentioned in his Monday Astrology Diary, Mercury-Mars-Pluto describes a seemingly external confrontation. There’s a power imbalance, but “most people will not pick up on where the power really is.” You’ll need to pay attention and think to get a clear picture of what’s going on below the surface.

That could be tricky. The Mercury-Mars-Pluto configuration describes the potential to be courageous (which is awesome), or overly sensitive, hasty in judgment, reactive to turbulence in others, and blunt or forceful. Some people get sensitive and weepy with PMS; others — like me — tend to get easily frustrated and intolerant, and have a hard time expressing those reactions gently. (I have natal Mars in Cancer.)

Being direct makes for clear, honest, efficient communication; but being direct while in an emotional, hormone-fueled pique is likely to undermine an interaction by putting the other person on the defensive. And if you’re being swept away by emotional reactivity, you’re not actually in a position of power.

It might feel powerful to express all that strong emotion, but you’ve actually tipped your hand that you’re not in control of yourself or the situation. The person with power is the one who can keep their cool, while the other person rants and reacts.

This is not to say that you should never express strong emotions in strong ways — far from it; that’s often healthy and necessary. But this astrology is describing a certain type of situation where a power balance is involved beyond simply getting something off your chest.

On a related note: simultaneous with Mercury-Mars-Pluto, the Cancer Sun is exactly square minor planets Eris in Aries. In addition to Eric’s advice Monday to “Be mindful of the ways you experience being divided against yourself,” including through subversive agendas, I’d add a question. Do you feel more compelled to identify with your emotions, or with your ability to compartmentalize them?

Give yourself a project — something to plan or organize, especially if it’s in service to something larger than you. Channeling any of this week’s less-pretty emotions into criticism (of self or others) won’t help; giving out some of what you’d like to receive, however, will.

12 thoughts on “Cosmic PMS? Both Women and Men Ride This Wave”