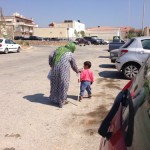 Marcy Franck, volunteering to help refugees on Chios, Greece, launches a clandestine one-woman mission to get milk into the hands (and bellies) of children at the deplorable, government-run camp Vial. Also offering baby vitamins and wipes, she’s amazed at the honesty the children and mothers are about how many mouths they need to feed.

Editor’s Note: Here’s the July 31 installment from my friend Marcy Franck, who is on the island of Chios, Greece, volunteering to help Syrian refugees. You can read her first two posts here and here on Planet Waves. Any donations made here go directly to aid. — Amanda P.

Thanks to three devoted grassroots organizations on Chios, food is delicious, nutritious, and adequately available for two of the three refugee camps on this Greek island. I’ve asked camp residents if they like the food, and for the most part they are happy with it and feel adequately sated most of the time. 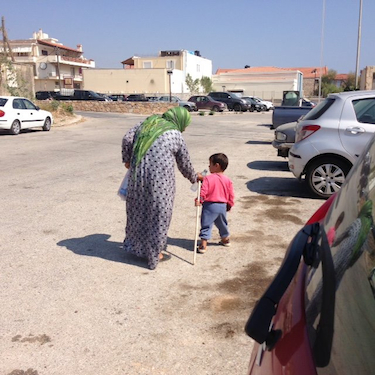 “This child was also thirsty, so I gave them a bottle of water. Thank you, donors, for helping so many wonderful families who are enduring the most difficult days of their lives.” Photo by Marcy Franck

This is a radical departure from the third camp called Vial. It is a government-run atrocity that defies humanity.

What I meant to say in neutral language is that it doesn’t focus on the comfort, health, or safety of its residents. Other than that, it’s totally fine.

Nutrition at Vial has been a problem since March 20, when the EU-Turkey deal went into effect. Before this time, the grassroots kitchens served meals at Vial every day. But when the government took over, the kitchens would arrive to distribute food but be turned away. Hungry people—pregnant women, children, sick, and elderly included—would watch the truck full of food meant for them drive off into the distance.

It’s not that the government isn’t providing food—they are. I was thrilled when I first heard that they would provide “catering” for the camp residents. I imagined canapé sandwiches with watercress served with a refreshing iced tea. Because clearly the Greek government, with the support of the European Union, would provide adequate funding to feed people in their care. Right?

The food they provide is often rotten, contains maggots, and lacks nutrition. For example, in the beginning they served only potatoes with no salt or oil, meaning residents’ diets consisted of simple carbohydrates with no salt, fat, or protein—unless you count the maggots as protein.

Even though the menu now includes more than potatoes, it’s still rotten and encompasses the full meaning of “dreadful.” People are getting sick and there is a widespread dental issue. Residents’ teeth are rotting because their bodies are so deprived of nutrition.

This is why my heart shattered into a thousand pieces when I saw the single mom and her two young, very thin children receiving food from residents of the better camps the other day. It is why my fellow volunteers and I knew we needed to get groceries for them immediately. And it is why, my dear donors, you have assisted me in my first clandestine milk operation.

Basically, this meant that we parked a car behind a building, out of sight from the main camp. Then I would find families from Vial (usually a mother with children) and shoulder up to them muttering “Doyouwantsomemilk?”

Even if you don’t speak English, when your child is malnourished your ears perk up at the sound of “milk.”

Some moms would simply nod, others would break out into a big smile. Kids would become giddy and giggly.

I’d take one or two folks at a time so we didn’t draw a crowd. Crowds are really difficult to manage, because of course everyone wants some of whatever there is, but there is not always enough to go around and it can become chaotic. I know this from my first foray into handing out stickers to kids. Let’s just say I’ve learned that, when distributing stickers, you must have the discretion of a drug dealer. You have to scope the joint first and you don’t whip those puppies out unless there are less than five kids within view. Otherwise, mayhem! 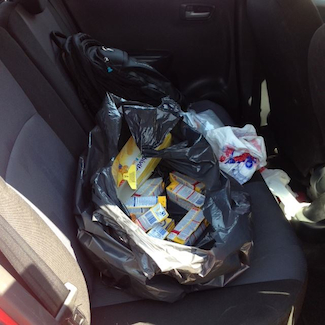 When the moms and I got to the car, I was able to fill plastic grocery bags with bottles of milk, baby food in pouches (vitamins! Huzzah!), baby biscuits, and baby wipes. On this last item, one father had told me earlier that they haven’t had wipes for going on four weeks now. Insane.

Because there was enough milk and baby food pouches in our warehouse, I was able to use it for this distribution. But your donations went into baby wipes, which were just as gratefully received by about 20 families.

I was touched and impressed by the integrity of both moms and kids during this operation. Only one kid tried to get more for her family than she was entitled to, by telling me that she had an extra sibling. The two other kids with her kept their friend honest, instead of catching on to the racquet and adding siblings for themselves. Similarly, the moms were honest about how many kids they had—even knowing they would get one item per child, moms still told me when they had only one or two children.

This last point is worth thinking about.

These are the very same people many Americans fear are terrorists, which gives an excuse to turn a blind eye. But even in the worst, most difficult days of their lives they live with honesty and integrity.

Thank you, donors, for making life easier for the dear people living in these camps.

UPDATE 8/2/16
Great news! A grassroots organization on Chios has just negotiated with Greek Authorities at Vial to provide fruit to Vial residents twice a week. This is a small step in the right direction, filling a major need for vitamins and fresh food at the camp. It is $400 to distribute once, $800 per week. Please consider donating to bring fresh fruit to these amazing people!

UPDATE 8/3/16
In a fabulous twist of fate, one of the NGOs on the island has agreed to subsidize the fruit deliveries for now. If you have made a donation with the idea that it would be used for fruit, please let me know if you would like a refund. I’m sorry for the switch! But this is great news.

I’m still collecting donations! To learn more about my volunteer trip to help refugees in Greece, and how you can help too, click here.