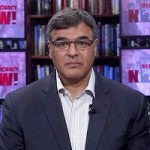 CIA Whistleblower John Kiriakou: We Should Be Considering Impeachment If Trump Obstructed FBI Probe
Donald Trump is facing yet another major scandal. The New York Times is reporting Trump personally asked FBI Director James Comey to end the agency’s investigation into Trump’s former national security adviser, Michael Flynn. The Times reports Trump made the extraordinary request to James Comey during an Oval Office meeting on February 14—one day after Trump fired Flynn for lying both publicly and privately about his contacts with Russian officials. Trump reportedly asked Vice President Mike Pence and Attorney General Jeff Sessions to leave the room before making the request to Comey. After the meeting, Comey wrote a memo quoting the president saying, “I hope you can see your way clear to letting this go, to letting Flynn go. He is a good guy. I hope you can let this go.” John Kiriakou spent 14 years at the CIA as an analyst and case officer. He was jailed for 23 months after he became the first CIA official to confirm publicly the Bush administration’s use of waterboarding.

Inter-American Commission on Human Rights to Probe U.S. Border Patrol over Killing of Mexican Father
The Inter-American Commission on Human Rights, in Washington, D.C., has agreed to open a case against the U.S. government for the murder and cover-up of Anastasio Hernández Rojas, who was killed by border agents seven years ago. Hernández Rojas died as he tried to cross the border to return to San Diego, where he had lived for 25 years and had fathered five children. The San Diego Coroner’s Office classified Anastasio Hernández Rojas’s death as a homicide, concluding he suffered a heart attack as well as “bruising to his chest, stomach, hips, knees, back, lips, head and eyelids; five broken ribs; and a damaged spine.”

Activists Sue to Block Plans to Bury 3.6 Million Pounds of Nuclear Waste Near California Beach
Environmental activists in California are fighting plans to store 3.6 million pounds of highly radioactive nuclear waste on a popular beach in San Diego County. In 2012, a radioactive leak at the San Onofre nuclear power plant forced an emergency shutdown. The plant was fully closed by June 2013. Now residents are fighting the permit issued by the California Coastal Commission to store the millions of pounds of nuclear waste in thin, stainless steel canisters, within 100 feet of the ocean.