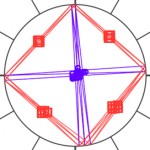 To read this article you need to be a paying member (Core Community Pass or All Access Pass) or a registered reader, which is free. Paying members have received the link via SMS as part of their Pocket Service and will be sent the text as a special edition shortly. – efc Sunday at 11:53 […]

To read this article you need to be a paying member (Core Community Pass or All Access Pass) or a registered reader, which is free. Paying members have received the link via SMS as part of their Pocket Service and will be sent the text as a special edition shortly. – efc

Sunday at 11:53 pm EST (Monday at 04:53 UTC) the Moon reaches an opposition to the Sun, which is the Cancer Full Moon. Every Full Moon has something in common with every other — and every one is unique. This is similar to The First Law of Cats: They are all the same, and they are all different. 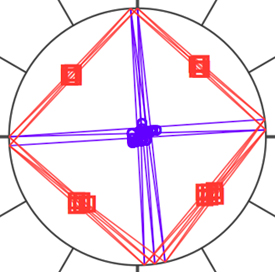 Central aspect pattern of tonight’s Full Moon in Cancer. The lines connect the Moon, the Sun, the lunar nodes, Uranus, Pluto and the brightest asteroid, Vesta.

This Full Moon is in Cancer, the sign of the Moon’s rulership. This typically happens once per year; very rarely, there are two Cancer Full Moons in a row, though not this year.

That grants dignity to this Moon, and an emotional quality that might be described as passion, drive or instinct.

With the Moon closely trine Chiron and in a wide trine to Neptune in Pisces, this effect can rise to the level of intuition, which may come through dreams, one’s emotional body or ‘just knowing’.

If you get that kind of information, I suggest you act on whatever you want to address after the aspect has passed, not before. The Full Moon typically comes with pressure to speak or act. But you want to make that choice under your own steam, and make sure that you’ve accounted for any emotional distortions.

Remember that the Full Moon on its own has a quality of releasing deadlocks. That, you want to let the celestial bodies do. In any event, the momentum of the moment is likely to come with a “whatever happens, happens” feeling. Still, I always recommend a conscious approach to existence, and using astrology to help with that end.

The distinction of tonight’s Full Moon is that the Moon and Sun meet these points called the lunar nodes at a right angle. Even trained astrologers have difficulty understanding the lunar nodes, so I will offer as simple a concept as possible. In essence, it’s the picture of finding your balance — or of tipping the balance of your life in a way favorable to you. 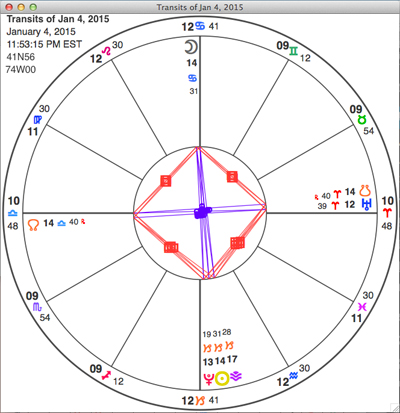 Chart for the Cancer Full Moon, this time showing where the planets are placed, around that grand cross. Uranus and Pluto are below and to the right. The lunar nodes are along the horizontal axis. The Moon is high in the sky — at the top of the chart.

First, they are associated with exact meetings of the Moon and Sun, called eclipses. Eclipses are personal and global transition points. They happen when there is a New Moon or Full Moon conjunct one of the nodes. Tonight’s Full Moon is square the nodes — it meets them at a right angle, and the aspect is exact to a small fraction of a degree.

The effect is also magnified because the Moon is conjunct the ascendant of the oldest astrology chart, the Thema Mundi or hypothetical chart for the world. That chart has 15 degrees Cancer rising, the exact position of this Full Moon.

The Cancer Full Moon marks the midpoint between eclipses in a vivid way. Because of that we have an eclipse-like event, though it’s more likely to feel like a gentle tipping point than shooting the rapids (the usual sensation of an eclipse).

What’s emerging around now will offer preparation for the eclipses of March, which are an impressive pair. More on that as the time draws a bit nearer. Just keep some notes on what’s happening now, because they’re going to come in handy in about three months and possibly sooner.

One last distinction of this Full Moon. The Sun is conjunct Pluto and square Uranus; the Moon is opposite Pluto and square Uranus. Said another way, this Full Moon is an expression of the Uranus-Pluto square — the 2012-era aspect, the one that is in many ways reflecting or defining our moment of history. When nearby planets like the Moon and the Sun align with distant, potentially abstract planets like Uranus and Pluto, suddenly the whole thing becomes real; it’s possible to actually feel and notice the moment we’re in. Events like this grant a sense of immediate, vivid perspective.

You can USE THIS QUALITY to connect with your purpose, your vision and your sense of direction. Events may point or guide you to what you want or need to be doing now — if you’re paying attention. Zoning out, staying in the trance, drifting along and hoping for something better are always options. Now there is another option that is tangible, real and accessible — something you can choose now, and go with for as long as you want.