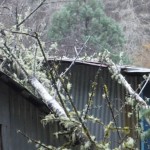 By Carol van Strum
At exactly sunrise on the winter solstice, on the rare occasions when the sun appears at all at this time of year, the sunlight pierces a small hole just below the roof peak. Unfortunately for inquisitive future generations, I must report this geographically precise placement to be nothing more than coincidence. 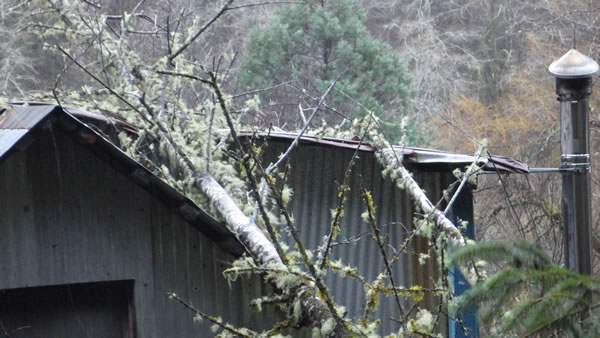 Future archaeologists poring over the remains of our humble dwelling will discover a remarkable phenomenon. At exactly sunrise on the winter solstice, on the rare occasions when the Sun appears at all at this time of year, the sunlight pierces a small hole just below the roof peak. For precisely eight minutes, a broad sunbeam illuminates a wall of faded Red Dwarf stills, ending its bright passage on a sheet of 32-cent Comic Strip Classics postage stamps.

The geographic precision of this solar alignment with a minor flaw in exterior siding will no doubt have future anthropologists drooling, but their interpretations will be far off the mark. Even farther off are any religious or ritual connotations they might attribute to this annual spotlight on Lister, Rimmer, the effervescent Cat, and other Red Dwarf regulars, to say nothing of the perforated portraits of Popeye, Nancy, Dick Tracy, Blondie, Alley Oop, Krazy Kat, Barney Google and Prince Valiant.

To avoid such future misinterpretations, I hereby certify that the aforementioned hole in the siding was not intentional and has no astronomical or mythical connotation, being instead the result of a stage carpenter’s hapless attempt to build a real live house. The Red Dwarf photos lit by the solstice sunbeam are no more than my son’s exuberant experiments with early downloading software, our first color printer, and a tube of superglue. And the postage stamps? That’s a tough one to explain without revealing an entire family’s inability to tear a single comic hero from the glorious bunch.

So much for the solstice, which in these parts is just another grey winter day. The day worth celebrating is not December 21, but December 26, and no direct Sun is needed. The 26th, you see, is the day the chickens notice the extra minute and a half of daylight and respond accordingly.

In our supreme arrogance, we think we’re smarter than chickens and other bird-brains, but if the Sun didn’t appear to “stand still” for a few days as Earth tilted on its axis, I doubt if we humans would notice the lengthening days until mid-January or even February, the increase is so minimal at first. But the chickens notice almost immediately; within five days of the solstice, the hens rearrange the tired straw in their nests and start gobbling oyster shell, kale, and other sources of calcium; after lazing around for months, their stud rooster stocks up on worms and protein, oils up his crow for another season of strenuous, nonstop sex, and wakes the world at first light again.

By December 26, the changes are apparent: after only one or two eggs per day since mid-October, the number increases daily, at first punctuated by occasional “practice eggs” — huge double or triple yolkers, tiny yolkless wonders, and more rarely shell-less, wobbly membranes like jelly balloons, bulging with precious cargo. By mid-February, each hen is producing an egg almost every day.

Chickens are not the only birds that respond to minute changes in day length after solstice. Certain owls, for instance, build their nests in this dead-time of winter and lay their eggs while the world sleeps under blankets of snow. I’ve never eaten owl eggs, however, and chickens are easier to observe than owls. An important distinction is that these are not commercially-raised battery hens, living out their short, beakless lives under artificial lights without ever seeing the Sun or sky or seasonal changes in daylight, and never even dreaming of a rooster; their life span is measured in months. The chickens here are farmyard critters, with their own raccoon-proof house and yard, and access to unlimited greenstuff and bugs; their lives follow the seasons and so does their egg production.

Long ago, I tried installing lights in the chicken house and keeping it lit during the winter, which ensured constant high egg production through the year, but the hens only lived for a year or two, and I took the lights out; the oldest of our hens since then have lived fifteen years or more, some laying eggs seasonally right up to their last year before enjoying a well-deserved retirement. In return for our protection and care, they provide not only eggs but rich, organic manure for the garden, which in turn produces much of their greenstuff and many worms. Come winter, egg production shrinks with the shortening days and we turn to egg-less recipes, which makes December 26 a day to anticipate and celebrate:

8 thoughts on “Beyond Solstice”