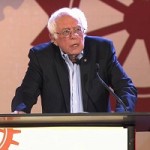 Last month more than 4,000 people gathered in Chicago for the People’s Summit. Independent senator, former presidential candidate Bernie Sanders delivered the keynote speech. During his speech, he repeatedly criticized the Democratic Party, calling it an “absolute failure,” and blaming it for the election of Donald Trump.

15 thoughts on “Bernie Sanders on Resisting Trump, Why the Democratic Party is an “Absolute Failure” & More”