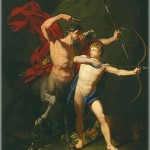 Notes on the “before and after” theme of Chiron’s discovery degree. I have observed that the discovery of Chiron describes the tipping point where matters of a holistic nature, including alternative forms of healing (almost all of which strive to be based in some holistic concept) are beginning to get some recognition.

When Chiron was discovered in November 1977, its position was the exact degree of the Taurus Full Moon happening this week. Events that involve the Chiron discovery degree evoke the theme of “before and after Chiron.” 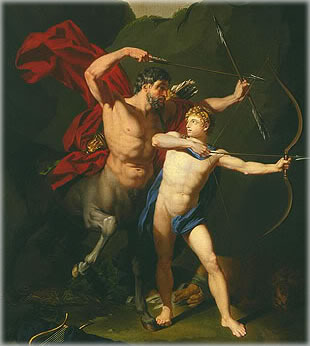 The Education of Achilles by the Centaur Chiron, by Jean-Baptiste Regnault (French, 1754-1829).

This is the degree with the symbol, “The pot of gold at the end of the rainbow,” which image is the namesake of Chiron: Rainbow Bridge Between the Inner and Outer Planets by Barbara Hand Clow. The symbol is a reference to linking the celestial and mundane orders of reality — which is Chiron’s speciality.

I have observed that the discovery of Chiron describes the tipping point where matters of a holistic nature, including alternative forms of healing (almost all of which strive to be based in some holistic concept) are beginning to get some recognition.

You can think of Chiron as the first healing practitioner of Greek mythology. He was taught medicine by Apollo, and then teaches the art to Asclepius, the god of medicine. In the distant past there was something called Asclepian manipulation, similar to what today is practiced as osteopathy or chiropractic.

Chiron was more than a healer (mostly, you can think of him in his role of mentor and teacher), however he was also renowned as a surgeon, herbalist and innovator of battlefield medicine.

The era of the Chiron discovery came with the first crumbling of the facade of traditional medicine being the only option. To give a few random examples, Bastyr University (which teaches naturopathic medicine) was founded the next year, in 1978.

Dr. Chester Wilk, a chiropractor, brings his first antitrust lawsuit against the American Medical Association (AMA) in 1976. It takes him 14 years, but the AMA is finally banned from claiming that chiropractors are “unscientific practitioners” who are part of “an unscientific cult.” Up to that time, medical doctors could be banned from the AMA for so much as playing golf with a chiropractor. Its “Committee on Quackery” is revealed as a fraud, and the AMA is ordered to pay damages and apologize (in the form of letters to MDs) to chiropractors annually for five years.

Organic foods, health food stores, massage therapy and many other forms of group and individual therapy were becoming prevalent.

And astrology itself began to evolve from a form of fortune telling and spiritualism to something taken more seriously as an authentic intellectual discipline. This was prompted by the efforts put into research into Chiron. To the extent astrology is practiced today as a healing art, we can thank the discovery of Chiron and the early astrologers who took note of its existence and did original research.

All of this is the spirit of the Chiron discovery degree. When you have alternative healers available to you, when you can get anything you need in a health food store, when you have access to organic food or even the idea that it exists, remember that before the late 1970s none of this was widely known or availab

2 thoughts on “Before and After Chiron”