MORE JUPITER! (Sorry, couldn’t resist.) In today’s archive selection, Eric replies to a reader who’s been hearing about Jupiter moving into her Sun sign, and has been waiting for luck and expansion, but hasn’t been feeling anything yet. Published Feb. 11, 2005 (during Jupiter’s last visit to Libra) as part of Astrology Secrets Revealed on Jonathan Cainer’s site.

In today’s archive selection, Eric replies to a reader who’s been hearing about Jupiter moving into her Sun sign, and has been waiting for luck and expansion, but hasn’t been feeling anything yet. It was published Feb. 11, 2005 (during Jupiter’s last visit to Libra) as part of the Astrology Secrets Revealed series on Jonathan Cainer’s site. — Amanda P.

For the past few months, I’ve been reading about Jupiter moving into my sign, Libra. I’ve been reading about how Jupiter is supposed to bring luck and expansion and other good things, and that it will stay a year, but not return again for another twelve. My question is, I’ve been waiting for luck and expansion, but have not really felt it yet. When should Librans begin to feel the effects of Jupiter and is all hope lost once it leaves again in October?

I’m especially concerned about interests and contacts and relationships overseas, all that were initiated in 2004 and before. Does Jupiter’s expansion include dreams of life and love in foreign lands? I’m a little frustrated waiting for development in that area and feeling like I should give up and move on. I was born in Camden, New Jersey, USA, October 3, 1968, at 7:23 AM. 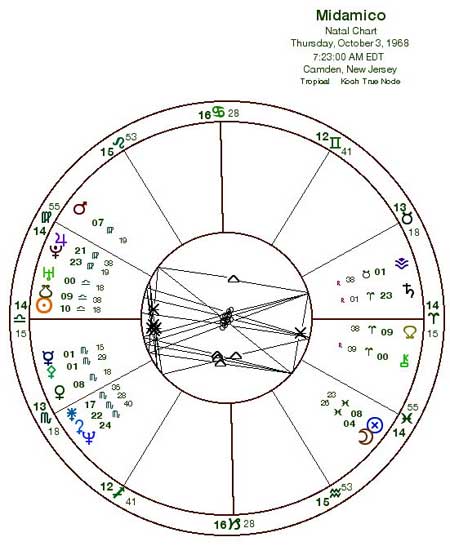 I hear your frustration, and I hear a long story you’re not quite telling us.

Jupiter is sometimes a puzzling energy. It can seem to arrive with waves of unusual good luck; then, it can seem like it’s a lot of blustery promise with no results.

On the luck side, you can’t complain when Jupiter delivers an opportunity, a slot machine jackpot, or a chance to escape from danger. On the bluster side, you need to see Jupiter as a presence that will support your own efforts. Basically, when you have Jupiter to work with, then you need to bring the Saturn so you get the most from both.

What do I mean? I know I’ve used this metaphor before, but it’s worth using a third time too, and I don’t know who made it up, but it’s a good one. You can think of Jupiter and Saturn as the two hands of God. Imagine you are a clay pot on the potter’s wheel. Jupiter is the hand inside the pot that pushes outward. Saturn is the hand outside the pot that contains the expansion and provides support and structure to hold the pot up.

Too often we think of Jupiter as ‘good’ and Saturn as ‘bad’ without realizing that they are two halves of the same process. Rare is it that just one planet is at work in a chart at a given time, and given that you seem to be having Jupiter issues, we might want to look at what is going on with Saturn in your chart. I say this, by the way, having never seen your chart — and now I’m looking at it — and it’s pretty darned interesting.

You have Libra Sun and Libra rising, these things we find on the left side of the chart, near that number 14 (your ascendant). The section above the ascendant is your 12th house; the section below is your 1st house. As of today, Jupiter is in the 19th degree of Libra — so Jupiter has gone over your Sun and ascendant once; it’s now retrograde and about to back over your ascendant again, and then it will station and cross for a third time. So, first of all, you can be patient, because this will work out for a while.

You can look at Jupiter transiting back and forth between your 1st and 12th houses as a way of bringing something from your 12th house (the hidden psychic realm, where, as you can see, you have many planets) out into your 1st house (your tangible sense of identity). There is a translation process going on. Part of the situation is described by your 12th house Sun, by far experienced by many as the most difficult house for the Sun. The Sun is about one’s glory, one’s sense of existence, one’s light in the world. In the 12th house, this light can be lost in a fog.

The other planets you have there create an extremely edgy situation. The Sun on the South Node, for example; this is another metaphor, like the 12th, for ‘egolessness’. Not easy! Then there are Uranus and Pluto in the 12th. These are the placements that feel like you live your life at the edge of a cliff, and the question is, when are you going to jump off to see if you can fly? I am speaking of a metaphorical cliff — the cliff of self; the brink of being or becoming who you are.

Now, here we come to the real question: are you holding back someplace? On some decision? Would ‘giving up’, as you say, actually mean you are making a concrete choice, while ‘not giving up’ and hanging in there mean that you are standing still? And consider — when you say ‘give up’, what exactly do you have in mind? What is on the deeper level?

I mentioned Saturn and I’ll close with that. Right now Saturn is making a transit high in your chart, across your 10th house. This is an incredible blessing, offering of a time of achievement and building. What, exactly, are you building these days? Please do ask yourself.

Last on this topic, you have [natal] Saturn in Aries in the 7th house. Admittedly this is a serious placement, and can be associated with many ways of looking at your life as a limited enterprise rather than a growth industry. But you have [transiting] Saturn in Cancer making a long square to your natal Saturn in Aries, which is suggesting (to put it mildly) that you break out of your shell, your construction of reality, or whatever you feel is holding you down.

Over the course of the year, your natal Saturn will receive two big transits: first, transiting Saturn will square it for the last time. Then, in late summer, Jupiter will oppose it for the first and only time this go-round. That is a point of contact, a development — something.

However, I truly don’t suggest you sit around waiting for something to happen, or for some big half-baked, half-frozen blobs of celestial gas to make the right geometry to your chart. As Mick said, “Get up, get out into something new / when there’s nothin’ moving.”