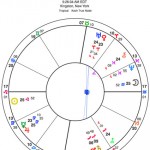 Eric looks at the forthcoming Aquarius Full Moon. Notice how many planets in the sky are currently at 23 to 25 degrees. The Moon and the Sun are cycling energy through all those points, which include the Uranus-Eris conjunction, and powerhouse Pholus. It may help you to concentrate firmly on steering rather than speed this week.

First, I’ve begun issuing signs of your 2016 midyear reading, BALANCE. Three sets of opposite signs (six in total) are available now (Aries/Libra, Taurus/Scorpio and Gemini/Sagittarius). More are coming soon! Cancer and Cap will go up tonight, Leo and Aquarius on Monday night, and then finally Virgo and Pisces on Wednesday night.

Our exciting new 12-sign Midyear Reading on forthcoming astrology, including Jupiter in Libra (plus much more!) is available for pre-order. Get all 12 signs here for $57.

It turns out that BALANCE was a rather workable theme, because the charts for late summer and early autumn are vibrating with opportunities to get some equilibrium in your life. The concept comes from Jupiter arriving in Libra on Sept. 9.

Your midyear reading covers the coming Mars-Saturn-Neptune alignment, Jupiter in Libra, the eclipses in Virgo and Pisces, and many other features of astrology that are coming to fruition over the next few weeks. You may still get it at a discounted price.

These 12-sign readings are designed for you to listen to multiple signs (it’s currently arranged in pairs of opposite signs, a way to work with balancing). Later in the day Monday we will send a special mailing with an individual sign offer. You may get all 12 signs here.

Many Aspects, Many Connections

The Full Moon takes place early Thursday morning in the U.S. and late morning in the UK and Europe. This opposition of the Moon and the Sun is being rated by some as a penumbral eclipse — that is, a faint dimming of the Moon by the edge of the Earth’s shadow.

This is a reminder that there’s a solar eclipse on Sept. 1 and a lunar eclipse on Sept. 16. I’ll begin to introduce those topics in Tuesday’s edition of Planet Waves FM. Meanwhile, be mindful in all the ways it helps to be aware during a Full Moon. Ease off on the pressure and let momentum carry you. Do what you must do to sleep well, if you’re one of those people who feels the effect of "the hunt" — that is, insomnia at the Full Moon. Avoid standoffs and gently work to resolve impasses. 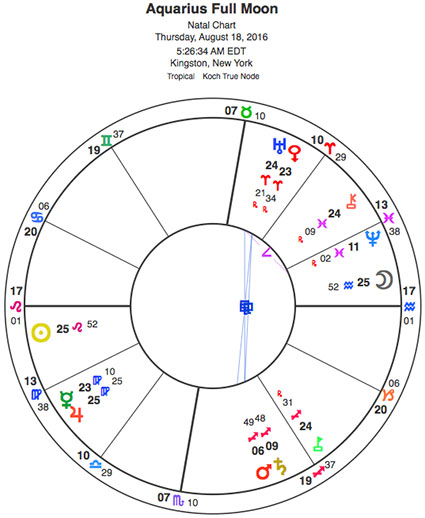 This lunation has plenty feeding into the mojo. Notice how many planets in the sky are currently at 23 to 25 degrees. The Moon and the Sun are cycling energy through all those points, which include the Uranus-Eris conjunction, and powerhouse Pholus.

So you can expect things to move briskly this week, and you may not have the feeling that you have a total grip. It would be best to proceed like you’re paddling a canoe rather than driving a train down the tracks. Guide your mind and aim for where you want to be, remembering that forces larger than yourself are also involved in the dynamic of your life.

The Full Moon brings the Uranus-Eris conjunction out of the background again. That means we can reasonably expect a little turbulence in our lives and extra chaos in the news. Uranus-Eris is also in the spotlight because Mars is gradually making a conjunction to Saturn. That is exact Aug. 24, though the pressure is building. There is a temptation to outright revolt against something; I would propose being subtler than that.

If there is something to push against, that would seem to be beliefs that no longer serve you. Are you really sure you actually know what you believe? Or is that level of thought transparent? Now is the time to notice your habits of assumption and presumption. This is not the time to do something simply because it’s there to do; rather, it’s time to act on the right thing to do, based on what you actually know.

Knowing means that something is confirmed over time, and contrasted with other possibilities. Knowing means you know you might be wrong. That increases your chances of getting it right.

I describe the Full Moon in the new Planet Waves TV.