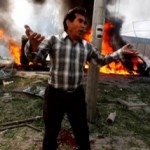 Lotfullah Najafizada, news director for TOLOnews, Afghanistan’s 24-hour news channel, speaks about the massive bomb blast in the Afghan capital that killed more than 80 people and wounded over 350 when it exploded during rush hour traffic on Wednesday morning in the heart of the city’s diplomatic area.

Afghan News Director: Kabul Bombing “Tragic & Huge,” Victims Mostly Working-Class Civilians
Lotfullah Najafizada, news director for TOLOnews, Afghanistan’s 24-hour news channel, speaks about the massive bomb blast in the Afghan capital that killed more than 80 people and wounded over 350 when it exploded during rush hour traffic on Wednesday morning in the heart of the city’s diplomatic area. No group has claimed responsibility for the attack. “The Afghan story [and] probably the Syrian or the Iraqi stories are just about numbers when attacks happen. And I hope it will change again for better one day, and you hear more about the human side of it,” Najafizada says. “What happened today is definitely a tragic and a huge attack, but this is not the only attack which happens in this country,” Najafizada says. “We lose tens of Afghans on a daily basis across Afghanistan. And some of them are not even in the news, even locally, because of the amount of incidents and attacks you see across Afghanistan.” Today’s bombing comes as the White House is weighing the Pentagon’s proposal to send thousands more U.S. troops to Afghanistan.

Amnesty International: Did $1 Billion Worth of Lost U.S. Weapons End Up in the Hands of ISIS?
A newly declassified Pentagon audit shows the U.S. Army failed to keep track of more than $1 billion worth of weapons and military equipment sent to Iraq and Kuwait, including tens of thousands of assault rifles and hundreds of armored vehicles. The audit found improper record-keeping, including duplicated spreadsheets, handwritten receipts and a lack of a central database to track the transfers. Some of the weapons have been tracked down In Iraq, says guest Patrick Wilcken, Amnesty International’s arms control and human rights researcher. “It’s very difficult to actually track individual weapons, but we have been looking at a lot of images and films of Islamic State deploying weapons and also the Shia militias that are now grouped under the Popular Mobilization Units,” Wilcken says. “We have looked at what type of weapons that they are deploying, and they’re deploying weapons from all over the world, including fairly recently produced U.S. weapons.”

The Intercept: As the U.S. Ramps Up Airstrikes on ISIS, Are Syrian Civilians Paying the Price?
A civilian monitoring group says U.S.-led airstrikes killed more than 100 civilians—including 47 children—on Thursday and Friday in the ISIS-held town of Al Mayadeen in eastern Syria. This comes as U.S. Defense Secretary James Mattis says the U.S. is shifting to “annihilation tactics” in its fight against ISIS. But as the U.S. ramps up airstrikes, are Syrian civilians paying the price? That is the question posed by The Intercept reporter Murtaza Hussain, whose latest piece is headlined “The U.S. Has Ramped Up Airstrikes Against ISIS in Raqqa, and Syrian Civilians Are Paying the Price.”

Private Mercenary Firm TigerSwan Compares Anti-DAPL Water Protectors to “Jihadist Insurgency”
An explosive new investigation by The Intercept reveals how international private security firm TigerSwan targeted Dakota Access water protectors with military-style counterterrorism measures. TigerSwan began as a U.S. military and State Department contractor. It was hired by Energy Transfer Partners, the company behind the $3.8 billion Dakota Access pipeline. The investigation is based on leaked internal documents, which show how TigerSwan collaborated closely with law enforcement agencies to surveil and target the nonviolent indigenous-led movement. In the documents, TigerSwan also repeatedly calls the water protectors “insurgents” and the movement an “ideologically driven insurgency.” Guests are Alleen Brown, reporter with The Intercept and lead author of their story, “Leaked Documents Reveal Counterterrorism Tactics Used at Standing Rock to Defeat Pipeline Insurgencies,” and Tara Houska, national campaigns director for Honor the Earth. She is Ojibwe from Couchiching First Nation.