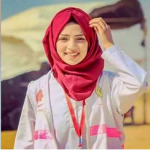 Witnesses say Israeli soldiers shot dead 21-year-old Palestinian medic Razan al-Najjar as she ran toward the border fence to provide medical aid to a wounded protester. Since nonviolent protests began at the end of March, Israeli soldiers have killed at least 119 people, including 14 children.

“A Source of Positivity All the Time”: Remembering Palestinian Medic Razan al-Najjar, Killed by IDF
Witnesses say Israeli soldiers shot dead 21-year-old Palestinian medic Razan al-Najjar as she ran toward the border fence to provide medical aid to a wounded protester. Since nonviolent protests began at the end of March, Israeli soldiers have killed at least 119 people, including 14 children. More than 13,000 have been wounded. “It was clear to everybody that she was a paramedic, that that was murder. I mean, that was a crime committed before cameras,” said Dr. Medhat Abbas, director of Al-Shifa Hospital, the largest medical facility in the Gaza Strip. Najjar’s cousin, Dalia al-Najjar, says the response of the international community to the Gaza crisis has been “really disappointing,” and notes the U.S. vetoed a draft U.N. resolution urging the protection of Palestinians on Friday, the same day Najjar was killed. “It’s a shameful side that the United States decided to take.”

Meet Stacey Abrams, Democrat Who Could Become First African-American Woman Governor in U.S. History
We speak with Stacey Abrams, who made history in Georgia last month when she became the first African-American woman to win a major party’s nomination for governor in U.S. history. The former state House Democratic leader defeated Stacey Evans, a former state representative who ran as a centrist. Abrams faces a tough race this November against her Republican opponent, who will be decided during a July 24 runoff election between Lt. Gov. Casey Cagle and Secretary of State Brian Kemp. If Abrams wins, she’ll become the first African-American governor in the Deep South since Reconstruction. “We can actually win elections without having to cater to these right-wing, harshly conservative policies that only serve to harm everyone,” says Abrams.

Stacey Abrams on Her Historic Georgia Primary Victory & How to Win Real Change as “Minority Leader”
The interview with Stacey Abrams continues here.