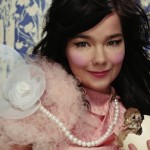 As Bjork — “a Scorpio’s Scorpio,” as Eric recently put it — enters her 50th year (and Chiron return) neither her imagination nor productivity show any sign of slowing down. It remains to be seen what greater wisdom Chiron imparts, and in what form.

By Len Wallick and Amanda Painter

Who else but Bjork could so revel in the deep, fecund themes of the very formation of all life, that she named her latest multi-media musical project “Biophilia” (which partly inspired “Cosmophilia,” the 2015 Planet Waves annual)? Who else but “a Scorpio’s Scorpio,” as Eric called her on his recent podcast?

Her work is so distinct Salon Magazine called her “the most important pop musician of her generation” in 2003. It should be no surprise, then, that her continual busting-open of the pop music genre has as its foundation (or, perhaps, pre-shadowing) that Uranus-Pluto conjunction right on her Midheaven: the angle indicating one’s calling in life and one’s presence on its stage.

With that astrological signature in combination with the rest of her chart, it’s no wonder she has a cult following for her music. Though perhaps what people most respond to is her Sun, Moon, ascendant and Neptune in all in Scorpio. Like many deep Scorpios, Bjork dares to “go there” and encourages the rest of us to do the same.

Yet she manages to do so without intimidating people (as one sterotype about that sign goes) even if she’s not to everyone’s tates. Bjork’s elfin countenance, passionate performances and vitally sensual lyrics instill the essence of life’s funky reality into her music. If you remember the strangely whimsical swan dress she wore at the 73rd Academy Awards on March 25, 2001, you know how much of her demeanor and artistic expression is about finding the playfulness in life as much as its transformative power. The same qualities are visible in many of her music videos.

Bjork grew up in Reykjavik, where she started performing and recording in 1976, at the age of 11. Ten years later she finally gained international prominence as the lead singer of The Sugarcubes, perhaps the most well known band ever to come out of Iceland (although Sigur Ros may now be vying for that distinction). 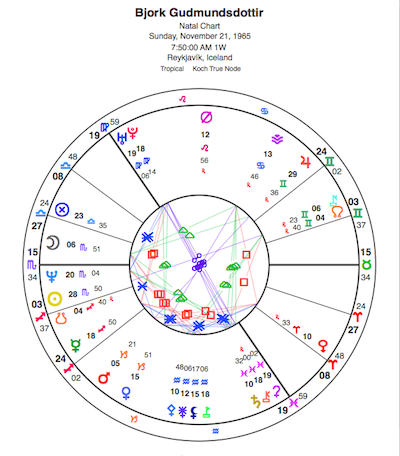 As an independent musical performer, Bjork has released eight studio albums (with a ninth coming in 2015), which have sold well over 20 million copies worldwide. In addition, she has branched out to other art forms such as cinema.

In the process of developing a constantly evolving and eclectic musical style, Bjork has become among the most respected artists in the world. Thom Yorke has called Bjork’s song “Unravel” (from her 1997 album Homogenic) his “favorite song ever.” This year, Bjork concluded a successful world tour performing her inter-disciplinary and multi-media “Biophilia” project.

As Bjork enters her 50th year (and Chiron return) neither her imagination nor productivity show any sign of slowing down. It remains to be seen what greater wisdom Chiron imparts, and in what form.

True to her generational motif of Uranus and Pluto moving from conjunction to their opening square (which we’re all living under now), Bjork’s creativity includes numerous charitable projects and extensive mentoring of up-and-coming musical artists from Iceland and other parts of the world.

One can see that facet of her life also in the triple conjunction of Saturn, Chiron and Ceres on her IC in Pisces, exactly opposite her Uranus and Pluto. Chiron is the teacher, focusing awareness; Saturn provides a strong container for that awareness and expression; Ceres insists that it all be nourishing to the soul. In Pisces, that art comes from the cosmic ocean and is offered to all.

Reflecting a social conscience as evolved as her art, if a united world were ever to need a president, Bjork would be an excellent candidate.

One thought on ““A Scorpio’s Scorpio”: Happy Birthday Bjork!”