As Len Wallick describes it, when the Sun finally leaves Capricorn to enter Aquarius on Thursday, the Moon will be moving to change signs at almost same time. What follows will implicitly set you up to make at least one change to call your own in the next month or so.

You might say it’s rare for the Sun and Moon to change signs at essentially the same time (which is basically what will happen on Thursday), but it should not be surprising in the current context of astrology, world events and your life.

First off, to have the Sun move from a cardinal sign (Capricorn) to a fixed sign (Aquarius) is to imply that something which initiated in consciousness about a month ago is now about to take a lasting and publicly acknowledged form. The progress of the current season defining itself since the third week of December is but one example.

What’s more, when you consider that both Capricorn and Aquarius are originally ruled by Saturn, whatever does take form will likely serve to define things for some time. Throw in the Moon moving from cardinal Libra to fixed Scorpio less than an hour after the Sun enters Aquarius, and you have a lunar last quarter on top of everything else.

The Moon’s last quarter phase takes place about a week after the immediately preceding Full Moon. It’s a point of evaluation, possibly even tension as regards to the current lunation cycle that started with a New Moon about three weeks before. The fact that you have to be up past midnight to see a last quarter Moon rise implies a private process in parallel with public manifestations indicated by the Sun.

When you look at what will be happening in Washington D.C. this week, the Sun’s ingress to airy Aquarius on Thursday as described above will probably resonate externally. Should you note how a lot of people seem to be coming down with the flu at the same time, the concurrent lunar last quarter in moist Scorpio will very possibly make more sense internally.

Even so, you should always remember that astrology is not destiny. Simply because your life is almost certainly synchronized to some extent with the seasons does not prevent you from sojourning in some other latitude to adjust your attitude.

Nor do the Moon’s phases necessarily dictate your fate. You always have a choice about whether to go with the flow or depart from it. Neither the sky, nor politics, nor even your internal life need define you. Ultimately, it is in your power to at least partially define yourself in the context of what goes on with both the sky above and on Earth below.

Interestingly, the next lunar cycle will implicitly offer some symbolic points of departure. The next New Moon is on Jan. 27 (or Jan. 28, depending on your time zone). Two weeks after that, the coming Full Moon will be a lunar eclipse.

Two more weeks after the lunar eclipse of Feb. 10 (or Feb. 11), the New Moon of Feb. 26 will constitute the proverbial “other shoe,” in the form of a solar eclipse. The time in between those eclipses will be yours for the taking, if you will but have it be so. 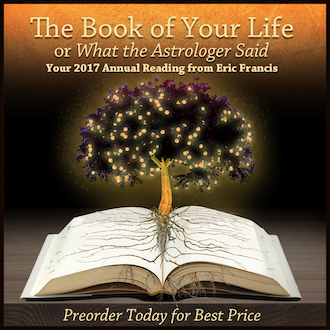 If there is any time that favors breaking patterns, it’s the period between eclipses. If the Sun’s ingress to Aquarius shortly before 4:24 pm EST (21:23:32 UTC) this Thursday does not bring a change to suit you, bide your time.

First, think about the changes you would most like to make.

Then, pick from among those options the one you would be most likely to manifest. Finally, set your sights a month down the road as a realistic timeframe in which to get it done.

It may not sound like much of an accomplishment to plan ahead and make one simple change in rhythm with the cosmos. To do so with conscious intent, however, has the potential to empower you as perhaps never before. Imagine rising above the season to transcend both external events and internal trends and define yourself. If that’s not an exciting prospect for you, what is?

4 thoughts on “A Prospect To Make”