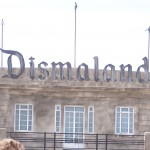 Since Amy Elliott lives in the UK, we took the opportunity to send her to Banksy’s dystopian theme park, Dismaland. Armed with a camera (borrowed), a notepad and a train ticket, she duly went — and found it to be anything but dismal.

It is man’s fate to outsmart himself. — Message by Jenny Holzer at Dismaland

“He’s not a great artist,” the taxi driver said as we approached Banksy’s latest exhibition — a ‘bemusement park’ set in an abandoned Tropicana factory, right by the sea. Whatever you might think of that statement, the next one definitely rings true: “It’s his ideas.” 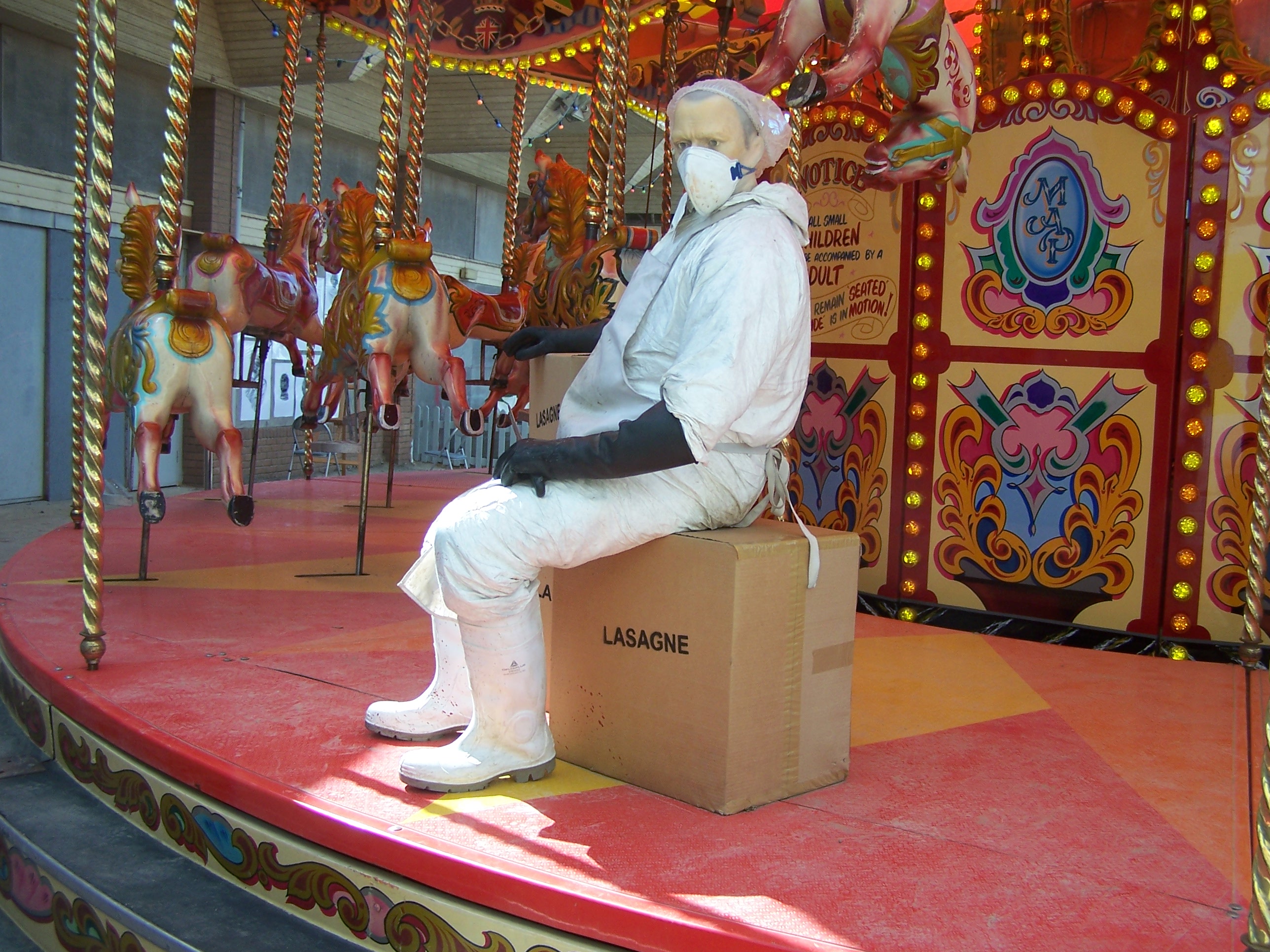 The horsemeat scandal, illustrated. All images by Amy Elliott.

In case you’ve never heard of the very British institution that is Banksy: he’s a long-active street artist, whose real identity is unknown — presumably to evade arrest for all the graffiti.

His “ideas” as portrayed in his work show a satirical and thoughtful mind, consistently alive to the human struggle. This, far more than the question of his identity, gives him a fascinating quality.

I’d reached the seaside UK town of Weston-super-Mare, near Bristol, at about 1pm. Rather suitably, one of the train connections I took, packed out like the Tube at peak time, was termed “The Misery Express.” On a day like today, it seemed to me just part of the adventure.

To a certain extent, when faced with a Banksy, it’s evident how the work is going to be expressed: cleverly, offering a clear message and something to think about, but clouded just a little in mystery: just enough to involve you, keep you intrigued. Dismaland follows this pattern; but in 3D, as a massive collaborative effort, and if possible with even more chutzpah.

Everything I had heard promised was there. The security scanners in cardboard, courtesy of Bill Barminski, were flanked by annoyed ‘guards’ who would not let you through if you were smiling; once inside, the performer-stewards were indeed cross, grim, or sullen by turns. The buildings were dull and appeared shoddily-painted. 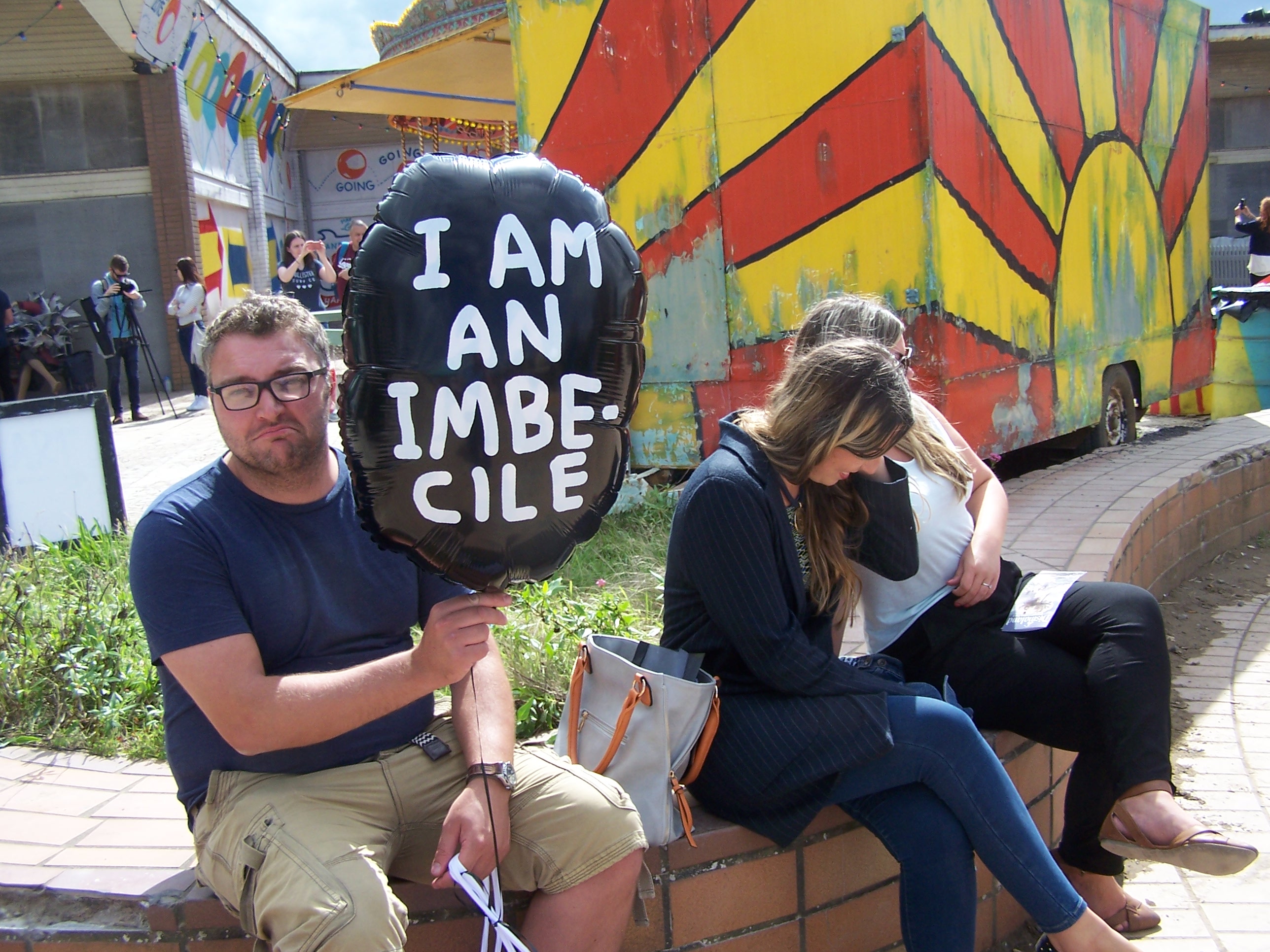 The layout was a twisted take on a day out at the beach, complete with ultra-slow Caribbean music over the loudspeaker: a pretend paradise in a virtual prison yard.

Occasionally the music would be interrupted by a little girl’s voice, as if for an announcement, except it would be an unusual, thoughtful phrase created by Jenny Holzer, such as: “Being alone with oneself is increasingly unpopular.” Black souvenir balloons, by David Shrigley, proclaim in stark, bold capitals, “I am an imbecile.”

Banksy has signed a group of artists from across the world, many unknown, who each brought their unique insights and creations. Dystopian it might be, but Dismaland is a wonderland of art. Potentially among the most recognizable were Mike Ross’s Big Rig Jig, Michael Beitz’s distorted picnic benches and Damien Hirst’s pickled unicorn. Other notable contributions were Huda Beydoun’s images of Saudi women (with Mickey Mouse silhouettes), Jenny Holzer’s thoughtful billboard texts, and Ronit Baranga’s mutant crockery.

Jimmy Cauty’s incredibly detailed model of a town in the moments after a riot, called “Aftermath Displacement Principle,” is judiciously placed prominently in its own room at the end of the gallery section. Featuring 3000 tiny handmade police, the model has had to be updated because, according to Cauty: “amazingly, in 2013 people weren’t going around staring at their phones all the time and now they are.” 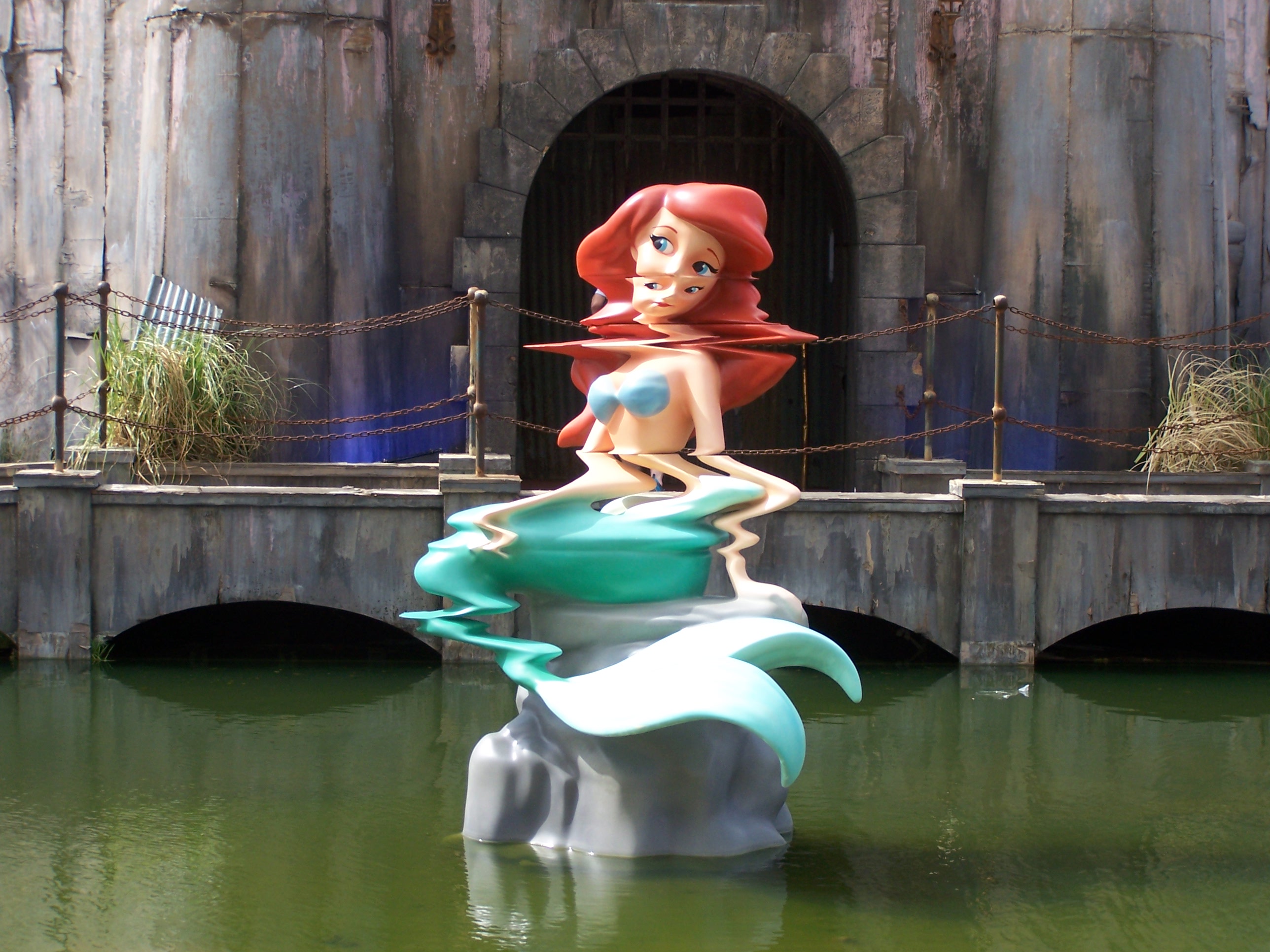 A Disney-esque mermaid. With a difference.

The ‘amusements’ were both thematic and distinct: a caravan (camper van), adorned with a NASA sticker, reworked to rotate around the people inside as they sit still.

There’s the merry-go-round on which one of the horses is replaced by a person in a surgical mask with boxes labeled “lasagne” — a reference to the horsemeat scandal of two years ago. The mini-golf is the mini-Gulf; the name says it all, as do the scattered oil barrels.

And then there’s the boat pond: a Banksy contribution, in which the remote-controlled boats are either over-filled with refugees or populated by police. It’s a brilliant satirical piece; and in these days when the drowning of Aylan Kurdi is still fresh in our minds, it seems invested with extra poignancy.

The ‘cinema’ is a big screen set on a trailer, with deckchairs and stone steps for the audience to sit on. A huge image of David Cameron, champagne glass in hand, smugly overlooks the area. The screen shows a loop of short films, chosen by Banksy; amusingly, one of the inclusions was the hilarious “F*ck That” satirical guided meditation. (By the way, anyone with creative aspirations should immediately see this video by Cernuto and Glass.)

The famed centerpiece, the Disney-esque castle containing the overturned princess coach, is perhaps less of a feature than has been touted. There is little to see, except the sculpture itself by the light of perpetually flashing cameras. 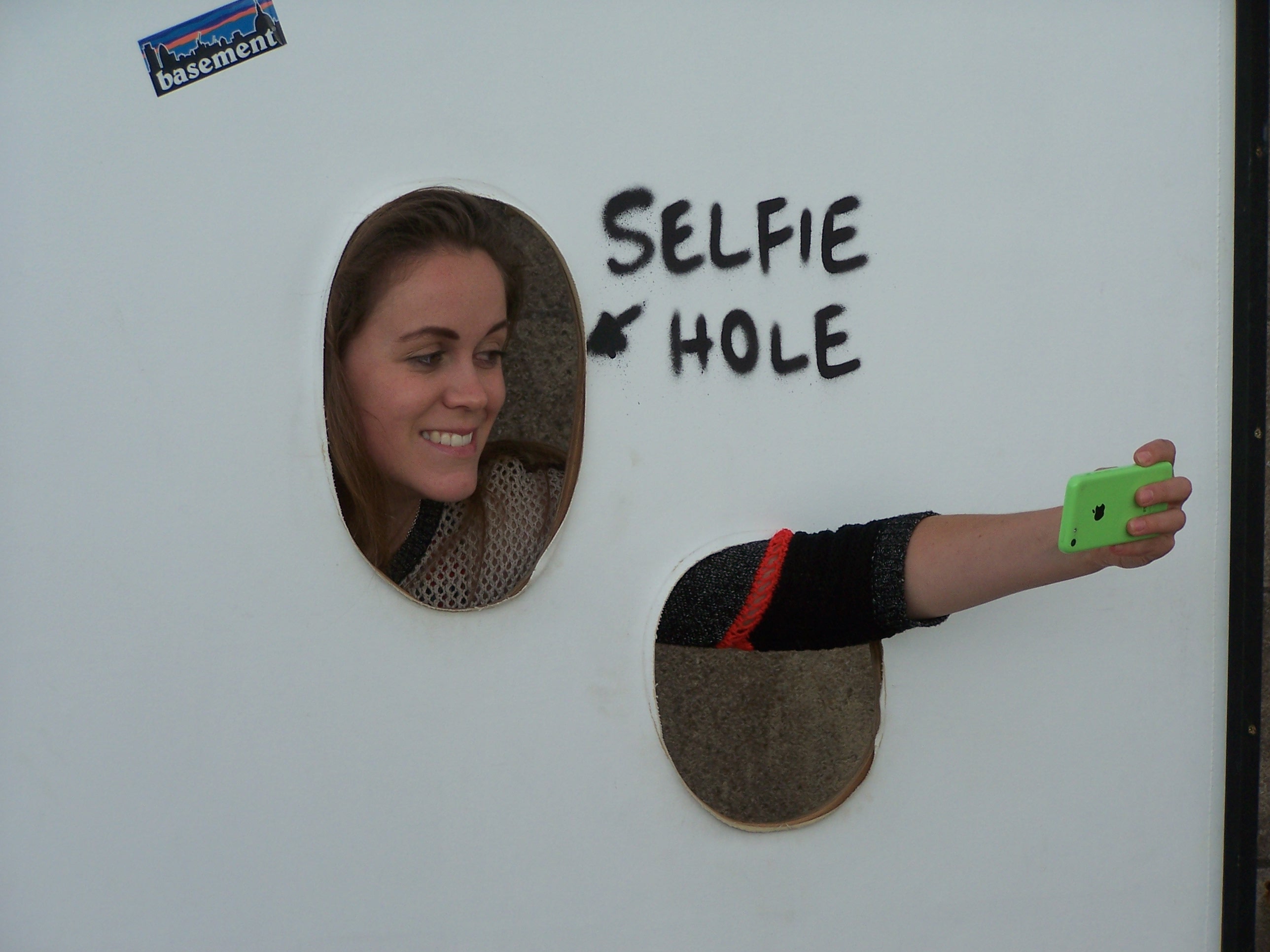 Satire for our times.

One suspects that given the theme park’s title, this piece is here purely out of obligation. Much more congenial is Guerilla Island.

This is where the activist in Banksy is given full play. Not so much in the water slide shaped like a capsized armored police vehicle, as in the billboard with statistics on deaths while in police custody. Then there’s the tent packed with banners and protest signs, from campaigns past and present. The UK Independent Workers’ Union has a stall here, giving visitors the opportunity to take positive action.

As you leave, you pass through the inevitable gift shop — a satire on just about every tourist attraction going — with real enough Dismaland T-shirts and posters. And, of course, shop dummies giving the one-finger salute.

This description of Dismaland is necessarily incomplete, because there were so many wonderful things to see. The attention to detail is superb. Every stained wall, every exposed piece of wiring, every lick of paint — or absence thereof — seems meticulously engineered to create the dystopian world Banksy and his collaborators have brought to life.

I had a good laugh with one of the bartenders over the disappointed review by Jonathan Jones of The Guardian.

It is clear that some have failed magnificently to appreciate just how brilliant Dismaland is. 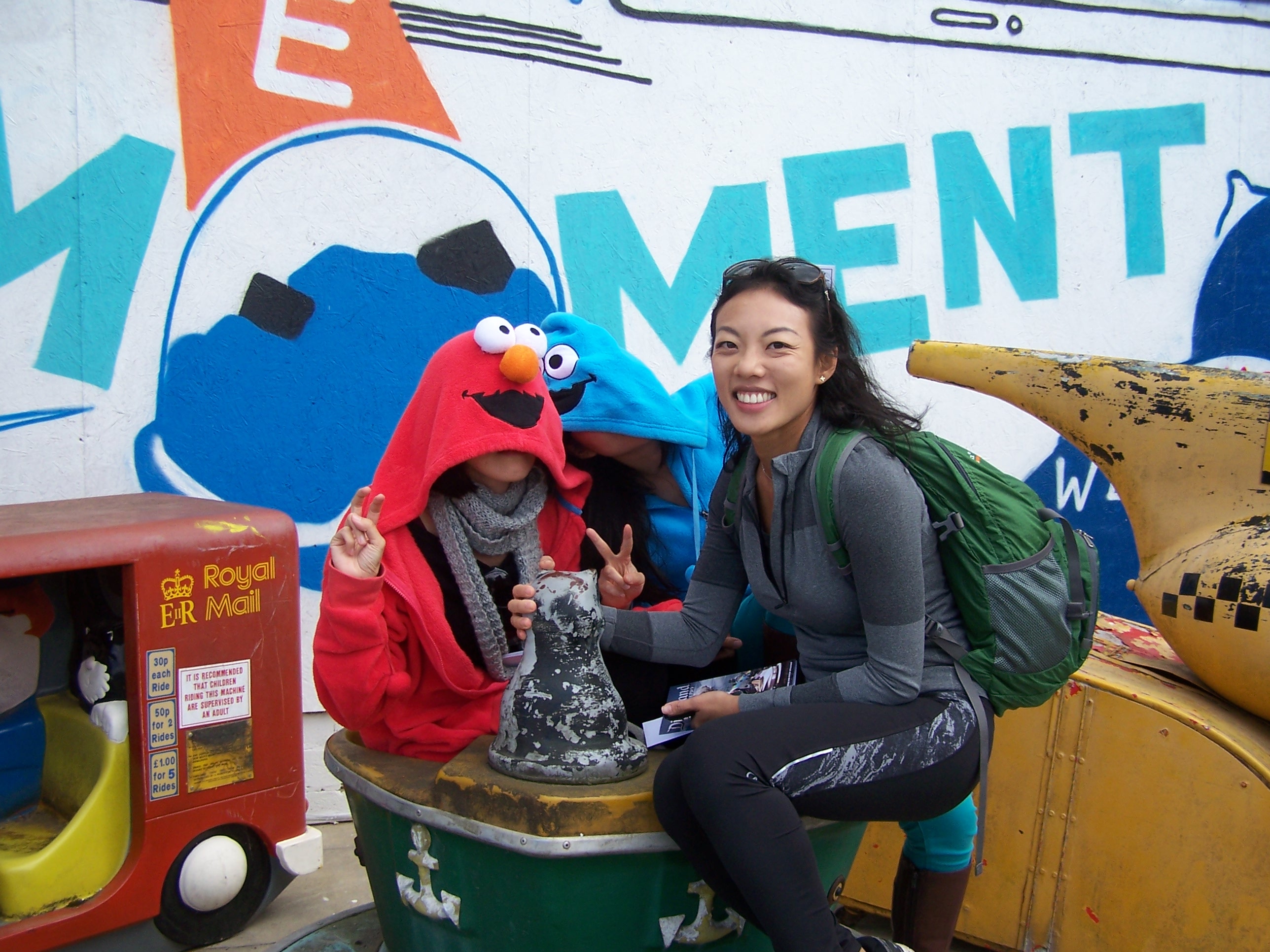 Henye, Faye and Charmaine from North London, who helped me navigate the queues. Thanks, ladies!

Everyone I spoke to was full of its praises, with one visitor describing it as her “perfect day out.” The folks on the union stall also expressed bewilderment at the desultory and muted media coverage the park has received since its opening.

It’s not, I suppose, entirely surprising that big media would wish to suppress someone who is so obviously an anti-establishment figure, an outspoken rebel. But the studied avoidance is not only intended for Banksy, it seems, but Dismaland itself.

The blatant allusions to the Disney empire have served to create the assumption that the theme of the park is merely taking, so to speak, the Mickey. Banksy has had to deny this by press release. But the actual contents give a very different and much more serious message — a grave reflection on the current state of the world, with specific references to David Cameron’s Britain.

Banksy has been quoted as saying that theme parks should have bigger themes. In Dismaland he has manifested that idea in the superlative. At first you smile at the clever jokes and the artificial sourness of the performers. Then the seemingly dispersed, more significant concepts sew themselves together. What results is a complete picture: how off-the-rails consumerism, media fabrications and abuses of power relate to the war-torn landscapes of the Middle East, the destruction of the environment and many, many innocent deaths.

Now that’s dismal. But there is always hope for better, especially when the aware take action and protest. As the child said over the loudspeaker, “Push yourself to the limit as often as possible.”

If you live in the UK or happen to be visiting there this week, Dismaland will be open through Sunday, Sept. 27. Ticket information and other details are available here.

4 thoughts on “A Dismal Day Out”