Believe it or not, Mercury is getting ready to leave Gemini tomorrow for emotional, receptive Cancer. Due to its recent retrograde, it has spent a little more than nine weeks in a very mentally oriented, verbal, dualistic sign; it will spend only about two weeks in Cancer. Meanwhile, it’s time to look ahead to the upcoming Venus retrograde.

Believe it or not, Mercury is getting ready to leave Gemini tomorrow. Due to its recent retrograde, it has spent a little more than nine weeks in a very mentally oriented, verbal, dualistic sign; chances are you’ve gotten rather used to it. 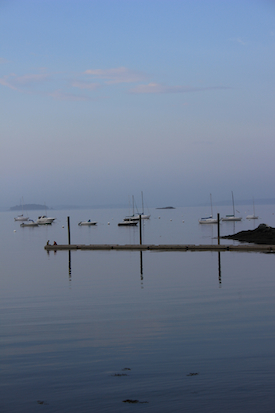 When it enters Cancer at 2:52 pm EDT (18:52 UTC), you can imagine it as a shift to feeling your thoughts. Traditionally, Mercury in Cancer has often been classified as a placement that’s ‘too sympathetic’ and ‘too receptive’. I suspect, however, that you might actually experience the change of expression as more like a quick, refreshing dip on a hot, dry day.

We are, after all, emotional creatures; a solid dose of empathy and heart is important to balance the tendency to get stuck in our heads. And Mercury will zip through Cancer in about two weeks, so you don’t need to worry about getting waterlogged.

Until then, Mercury is opposing the Galactic Core, the center of our own Milky Way galaxy, which lies in the direction of late Sagittarius. It might be an interesting experiment to try a little meditation or similar exercise and see if what Eric describes as ‘our cosmic homing signal’ comes through.

Speaking of Cancer, Eric has been absorbed in recording the Cancer birthday reading, which he should have ready for you later today. That means you can still snag it for the lower pre-order rate now; it makes a great gift, and is fantastic for those with Cancer rising, too.

Not everything is all about Cancer, however; with Venus moving into late Leo, it’s time to start talking about Venus retrograde. Stay tuned to the Planet Waves website and watch for your Thursday issue for more information. Eric is also planning a fantastic Midyear Reading based on the upcoming Venus retrograde.

On Planet Waves FM, Eric will look back at this weekend’s Grateful Dead 50th anniversary concerts and their place in American social history. That program should post around 5:00 pm EDT or shortly after this evening.

Amy Elliott was kind enough to stand in for Eric on the Monday Astrology Diary. Focusing on the Cancer Sun’s opposition to Pluto in Capricorn, she writes that this week is an opportunity to understand when a line has been crossed, and to begin to work out how to respond. 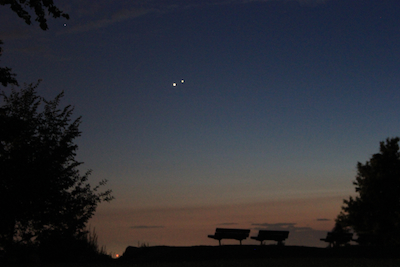 Venus conjunct Jupiter in Leo on July 1, viewed from Portland, Maine. They can still be seen after dusk in the western sky, though much further apart. Photo by Amanda Painter.

Pausing for a moment of mid-year reflection, Amanda Moreno works through some ideas about hierarchy and the process of ‘othering’ that she sees around her at all levels.

In a tarot reading that sees two major arcana cards and one from the minor arcana, Sarah Taylor explores what it means to experience illumination after a period of reflection, and how that has the potential to shift you from one state, or place, to another.

And on Saturday, Planet Waves celebrated the USA’s birthday with several offerings, including Eric’s archived article on liberating sexual pleasure, titled Coming to the Revolution; and Judith’s Gayle’s heartening take on Sen. Bernie Sanders (and others) entering the presidential race. As she notes, “There’s energy stirring from the bottom up to take on the greed and avarice at the heart of our social and political problems.”

Visit the Planet Waves website later this afternoon for Len Wallick’s column; I’ll be back there Thursday with a look at the weekend’s astrology.

3 thoughts on “A Cancer Mood, and Keep Venus in Mind”