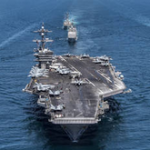 Donald Trump and Kim Jong-un have wrapped up a historic summit pledging to work toward complete denuclearization of the Korean Peninsula, with Trump announcing the end of U.S.-South Korean war games. The summit marked the first-ever meeting between a sitting U.S. president and a North Korean leader.

Trump Vows to End “Provocative” War Games on Korean Peninsula After Historic Summit with Kim Jong-un
President Donald Trump and North Korean leader Kim Jong-un have wrapped up a historic summit pledging to work toward complete denuclearization of the Korean Peninsula, with President Trump announcing the end of U.S.-South Korean war games. The summit marked the first-ever meeting between a sitting U.S. president and a North Korean leader.

A New Day for the Korean Peninsula: Christine Ahn Hails Denuclearization Pledge & New Peace Process
On Tuesday, President Trump and North Korean leader Kim Jong-un sat down for two hours in private, with only their two interpreters, for a historic summit held in Singapore. In a joint statement following the meeting, Trump and Kim pledged to recover the remains of American prisoners of war and those missing in action from the Korean War. The commitment was one of four plans outlined by the leaders after their historic summit, where they promised to work toward complete denuclearization of the Korean Peninsula.

﻿﻿﻿Rep. Ro Khanna: If U.S.-North Korea Summit Happened Under Obama, Democrats Would Be Cheering
As President Trump prepared for his historic summit meeting with North Korean leader Kim Jong-un, Senate Minority Leader Chuck Schumer and other top Democrats penned a letter last week threatening to maintain or even strengthen sanctions against North Korea if Trump did not ensure that the country completely dismantle all of its nuclear, chemical and biological weapons. The lawmakers wrote, “Any deal that explicitly or implicitly gives North Korea sanctions relief for anything other than the verifiable performance of its obligations to dismantle its nuclear and missile arsenal is a bad deal.” Progressives have blasted the letter for its hardline stance. Fifteen Democratic congressmembers, including Ro Khanna of California, penned a letter to President Trump, writing, “diplomacy is the only path to resolve the tensions between our countries.” In Washington, D.C., we are joined by Rep. Ro Khanna.