In his first news conference since his heart was replaced one week ago, former Vice President Dick Cheney announced Saturday that he regretted his “extensive” role in the attacks of Sept. 11, 2001 — and the subsequent coverup. 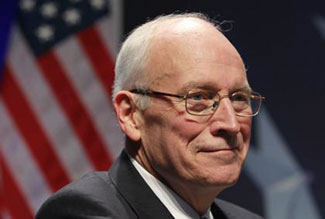 Former Vice President Dick Cheney said that “knowing the truth would be good for the country.” Photo: AP.

“It was a terrible, terrible thing to do,” said Cheney, speaking in the lobby of Bethesda Cardiac Unit in Maryland, the nation’s most prestigious heart center. Reporters, his transplant team and members of his family crowded around Cheney, who served for eight years under President George W. Bush.

“Looking back, I can’t believe Karl and I actually did that,” he added, referring to former White House staff member and Republican strategist Karl Rove.

“There are a lot of ways to start wars. I don’t know why we had to kill so many Jewish people,” he explained. As reporters shouted their questions, Cheney raised his hand and said, “I am sorry, this is very difficult. I don’t have that much more to say. I just needed to get this off my chest.”

Cheney said that he planned the attacks so that the United States could get a permanent military presence in the Middle East, and have access to Iraq’s largely untapped oil reserves, the third largest in the world. “I can’t believe people didn’t put this together,” he said, “especially since we outlined the plan publicly in 1998. Even if people trusted me, I take responsibility for lying. It just wasn’t right.”

He said that it was Rove who came up with the date of Sept. 11, which translates to 9-11, “so that people would reminded of it as long as they lived, every time they see an ambulance or police car. It was very clever marketing. Karl is good that way,” Cheney said chuckling. “But it’s not funny. Sorry,” he added.

Settling much speculation, he said: “I regret that we were aware that the date commemorates the CIA coup of Chile in 1973, but that was not intentional. It was in very bad taste.”

Cheney explained that the Twin Towers of the World Trade Center were in fact demolished by controlled demolition. “Those architects and engineers are right,” he said, referring to those who have shown it’s impossible that airplanes could bring down the towers, adding that airplane crashes into the towers merely served as a distraction. “They were drone aircraft,” he said. “Nobody was on board. That part is good,” he said. “I am proud that I suggested that. Everyone else wanted to use real jets.” 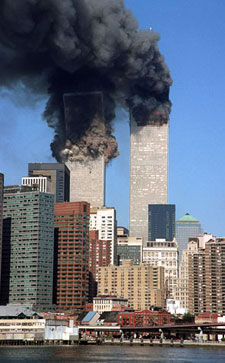 On Saturday, Cheney admitted to his role in the planned demolition of the World Trade Center — and the coverup.

He criticized the demolition of WTC 7, the third building to fall that day, as “sloppy work,” which he said was the result of “the CIA’s arrogance. They said nobody would notice, and by golly, they were almost right about that.”

He briefly mentioned how the Pentagon was really hit by a AGM-86B cruise missile, launched from an NSA destroyer on Chesapeake Bay. “It was not an airplane. It was supposed to be, but we had problems. We went to the backup plan, and visually it worked pretty well.” He made no further comment about the Pentagon.

Cheney then summed up the ways in which the government’s involvement was covered up. “But that’s not really an accurate description. The whole thing was a coverup.”

Attempts to contact former Pres. Bush at his home in Texas were not successful. Bush’s father, former Pres. George H.W. Bush, released a statement that said, “I never did like that guy.”

Truthout.org managed to reach Bill Clinton doing relief work in Namibia. “You would be real surprised how common this kind of thing is,” he said, while supervising a Habitat for Humanity house construction site. “I’m so glad to be out of the game.”

News of Cheney’s announcement spread around the Internet rapidly on Saturday, trending at record levels on Twitter as hashtag #yesireallydidit. Major news outlets, including The Washington Post and The New York Times, refused to carry coverage of the revelation. “We think that the vice president is suffering from medical complications or the influence of drugs,” the Times said in a statement. “We will not carry this story.”

Josh Finkelstein, The Post’s longtime managing editor, was confronted by reporters at Washington’s famous Intelligentsia restaurant on D Street. He said, “This is absurd. This cannot be true.”

“This is a medical issue, so I will let the appropriate professionals speak,” he said, turning the podium over to Dr. Kalibri.

“Sometimes when a major organ is transplanted, the patient takes on some of the psychological properties of the donor,” he said. “That seems to be what happened in this situation.”

The Associated Press reported several hours ago that Cheney’s new heart came from Richard Falcone, who was influential in the 9-11 Truth Movement in San Francisco. He disappeared mysteriously on Friday, March 23. The information was leaked to AP by an anonymous source at the Organ Clearinghouse Database (OCD) in Toledo, Ohio, which matches donors and recipients for the whole country.

Falcone was planning the release of his new book and DVD at the time of his disappearance. His family said that his blood type matched that of the former vice president — type O.

“Richie devoted himself tirelessly to the 9-11 Truth Movement,” his mother said. “But mostly he was a very nice person. We’re happy to see that the recipient of his heart has finally joined the cause.” ++

The author is an expert on the astrology of the Sept. 11 incident. We also offer a (non astrological) Sept. 11 resources area for those curious about the issue. And here is a prior nonfiction article, called History, Turning on a Phrase.